Eleven years ago, we had our first visit to the Chiodo Bros. studio–an experience that would create an indelible stamp on the formation of the then-fledgling idea we had for Open The Portal. From the life size animatronic Ninja Turtles suits, to the original characters from the 1986 puppet horror masterpiece Critters, to being starstruck by puppet after puppet (The aliens from Killer Klowns! The burger from Good Burger! The winter creatures from Elf! The Cyborg from Land of the Lost!), we were completely enchanted. One of the first things we remembered seeing upon entering the studio was a display stand featuring a small hardcover children’s book called Alien Xmas.

Eleven years later, it’s an honor to have been their friends for over a decade and finally to see this vision become a reality in the form of a stop motion Christmas special for Netflix. Check it out right here today, and we’d like to spend a special thank you to Stephen, Ed, Charlie, and everyone at Chiodo Bros. for being such a great inspiration and support for Open The Portal for all these years. 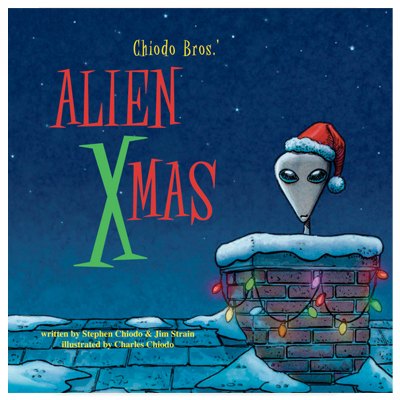